“It is true of the nation, as of the individual, that the greatest doer must also be a great dreamer.”
—Theodore Roosevelt

Gill’s Grilling isn’t exactly what it sounds like. “We don’t grill anything,” says founder Brian Gill. “I just liked the way it sounded.” But what the eight-year-old company does do is provide daily meal service and kitchen management for 21 fraternity and sorority houses at the University of Maryland.

Gill launched Gill Grilling Company the summer before his senior year at the university. When his fraternity moved into a chapter house on Frat Row, Gill was tasked with filling the house with tenants so that the fraternity could pay its rent. When one prospective tenant expressed reservations about living so far from the dining hall, Gill promised that he would personally cook for him. “In the name of filling a room in a frat house, Gill Grilling Company was founded with a grand total of one customer,” Gill says.

Soon, other members of the fraternity were asking him to cook. Word spread. By the time then-22-year-old Gill graduated from Maryland with a degree in economics, five other chapters had signed contracts, putting an end to his plans to go to grad school and get a “real” job. “I convinced myself that grad school wouldn’t be that much fun anyway and devoted all my efforts to my new company.” 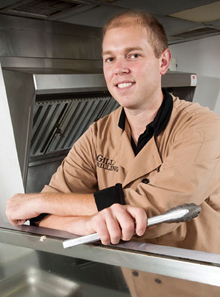 Due to youth and inexperience, Gill says that he made plenty of mistakes in the beginning. “We hired too many managers, leased an office that increased overhead without contributing to revenue, and didn’t provide any training. The biggest challenges we faced were all self-imposed.”

He also had a centralized kitchen, which meant having to deliver meals all over campus. Gill initially lacked a vision for his fledgling business. “As a company, we failed to analyze how our situation at any point in time fits in with the long-term plans of the company,” he says. The realization that he needed a long-term plan led to a total revamp of the company and a focus on customization over automation. Gill abandoned the office and began working from home. He started using chapter house kitchens, which eliminated an extra manager and the delivery driver. He hired and trained chefs to work full time at the fraternity and sorority houses, seven days a week. Gill had his suppliers deliver to the job sites.

Gill is looking to expand his model universities with Greek systems with at least 25 chapter houses equipped with commercial kitchens, preferably in metro areas. “We don’t have research that says for sure how many schools fit the model, but our estimate is at least 50,” Gill says. He’s also considering franchising the business or adapting it to a more scalable model. “We’re excited about the possibility of what the company can become.”

Over the past 2 decades, the professional food...